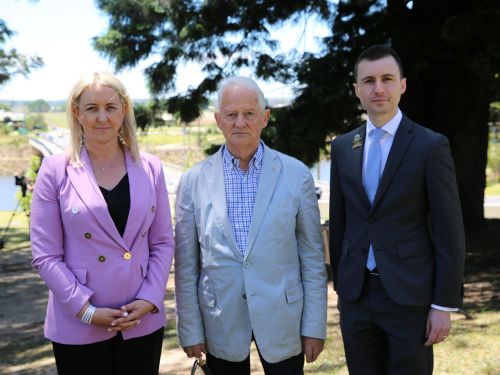 Mayors from Hawkesbury City, The Hills Shire and Hornsby Shire have welcomed the success of their campaign for a metropolitan council potholes repairs fund.

On Tuesday, Premier Dominic Perrottet along with Deputy Premier and Minister for Regional NSW Paul Toole and Minister for Regional Transport and Roads Sam Farraway announced $220 million of funding will be spent in Greater Sydney to help councils with heavy patching and pothole repair work after the state experienced record-breaking rain and multiple flooding disasters over many months. A further $280 million has also been allocated to regional councils to help them fix their respective roads.

Mayor of Hawkesbury City Council, Sarah McMahon, welcomed the funding and thanked her fellow Greater Sydney and regional mayors for their joint advocacy.

“This is a fantastic outcome. Sydney and the Hawkesbury have been suffering from the worst potholes in living memory. After six floods in three years, it has taken the combined efforts of many councils to make sure the voices of residents and motorists are finally heard,” Mayor McMahon said.

“This financial year we expect to spend $1 million on pothole filling alone – the most we have ever spent in a single year. This is on top of the estimated $240 million in repairs to flood damaged roads in the Hawkesbury, and our routine roads renewal and upgrade program of $22.5 million.

“Our Council teams have been working incredibly hard over the past few years repairing our damaged roads. We know there is a long road ahead but we are all committed to ensuring that motorists have safe roads to drive on when travelling to and from work, school and visiting friends and family.”

Mayor of The Hills Shire, Dr Peter Gangemi said the funding, which will be proportionate to the total distance of road network within each council’s area, was greatly needed especially after The Hills Shire Council adopted its biggest ever road maintenance budget to repair its damaged roads.

“This is fantastic news for local residents and shows that the NSW Government and the Premier were listening to our calls for support,” Mayor Gangemi said.

“Our roads are a top priority and Council spends millions of dollars each year to keep them safe and maintained.

“However, the rain and the multiple floods, caused by a third consecutive La Niña, has led to our roads deteriorating much quicker than usual, and an increase in potholes and subsequent road patching jobs. The funding needed to repair our entire network is now beyond Council’s annual funding means.

“The extra funding is welcomed and will help our Council to return our roads to their previous standard.

“I want to thank the Premier and the NSW Government for this much-needed funding. I’m looking forward to getting on with the repairs and returning our roads to a condition that our residents have been calling for,” Mayor Gangemi added.

“While we have been proactive in responding to reports of road damage to ensure safe travel for our residents, we have already expended much of the $3.2 million we had allocated for road restoration this financial year. We anticipate that a further $3-5 million is needed to address road failures,” Mayor Ruddock said.

“Following numerous representations to the NSW Government seeking funding for flood and rain damage, including damage to our local roads, we are pleased that the Premier has listened to us and has committed significant funding to help remediate the severe pothole damage across NSW.

“We look forward to hearing more details about the grant scheme so that we can move quickly to ensure Hornsby Shire can take the appropriate steps to ensure it receives its share of the $500 million to repair its damaged roads,” Mayor Ruddock added.

In November, Mayor McMahon, Mayor Gangemi, and Mayor Ruddock joined other mayors from Penrith, Campbelltown and Wollondilly to seek funding for metropolitan councils after the NSW Government announced it would provide $50 million to regional and rural councils to address their highest priority pothole requests.

Each of the six councils, from western and north-western Sydney, were excluded from the original road funding program - Fixing Local Roads Pothole Repair Program - despite each of them having rural areas and high numbers of potholes and road patching jobs – some seeing their highest-ever requests for work to be done.