Council will aim to manage and control populations of pest animals through a cooperative approach with other agencies and land owners. For more information on controlling vertebrate pests see: 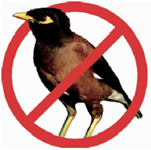 Hawkesbury City Council has gained an overwhelming response to the Indian Myna trapping project that was launched in September 2009. Over 350 people have joined the community-driven trapping program facilitated by Council.  As a result, the Hawkesbury Indian Myna Action Group (HIMAG) has been formed. HIMAG is helping to improve the biodiversity of the Hawkesbury area through community education and the humane control of Indian Mynas.

The Indian Myna bird is a species which is listed by the World Conservation Union as amongst the 100 most invading bird species in the world.

Indian Mynas are also described as an extreme threat to the Australian environment. Anecdotal information also suggests Indian Mynas reduce biodiversity by competing with our native birds and mammals for nesting hollows, destroying their eggs and killing their chicks to hijack nesting places.

How to get a PeeGees Trap

HIMAG has created a number of options in attaining an Indian Myna Trap (PeeGees Trap). You can buy, hire for free or make your own. See the full list of these options.

All residents are welcome to join the program and become part of this community run effort to control this environmental threat. For more information call (02) 4560 4525 or email martin.gauci@hawkesbury.nsw.gov.au or see all attached data sheets below.